If you are searching for the best cheaper and more portable alternative to Push, which has standalone MIDI capabilities and a number of amazing features, check out the Novation Launchpad Pro. This is most definitely one of the leading controllers offered at the market at the moment.

The Launchpad Pro is absolutely awesome for Ableton Live and provides an enhanced experience with the well-set buttons and useful controls, which limit the need of digging into your laptop during a live performance or while enjoying your music making session.

Since its release, the Launchpad has become one of the top recognizable and popular music tech pieces of gear in the last few years. It provides handy tactile control of Ableton Live, and the fact that it is programmable and inexpensive has made it a top choice for DJs, Live composers, music enthusiasts, and other users.

What is new in the Launchpad Pro

The Pro version of the Launchpad is the flagship product of Novation and features some major upgrades, including the amazing velocity and pressure-sensitive pads.

Although it is designed and made to work with Ableton Live, it is not purely a peripheral device for Ableton. In fact, it has a standalone MIDI mode, which plays well with different types of software, as well as independent MIDI controllers, which will allow you to use it to play hardware synths too.

Another superb feature of the Launchpad Pro is that Novation has deliberately left the firmware open, which allows for outside developers and hackers to create and offer custom apps to the device in order to customize it in accordance with their needs and personal desires.

The other great addition to the Pro version is the cool orange rubber base, which keeps the unit stable during use. It also is wider in order to fit in the added button strips which surround the pad grid from all sides.

The function of each button is printed on top for easy and quick visibility, and the colored LED strip fitted on the front indicates the current mode of the device.

The device can be connected to a computer via an extra-tight USB connection, which is so strong that any accidental disconnections are virtually impossible.  You can also use the Kensington Lock to keep the Launchpad connected even when intentional removal is attempted.

Once you connect this wonderful device to your computer, you just need to launch Live, which detects it automatically and sets up the MIDI preferences to make it ready for instant use.

How does it work – here is what to expect?

You will get started off in Live Session view, which displays the 8×8 window and Scene launcher for each row. The full color LED pads will light up in the same color as the clips, which will help you keep track of your progress.

The Launchpad Pro has dedicated buttons for different track controls, such as RecArm, Mute, Volume, Track select, Stop, Solo, or Mute clips on the bottom. This allows for fewer button presses and easier tracking of the overlaid controls.

The velocity control of the Pro version acts as virtual faders. If you press it once hard – the new parameter will be updated instantly. If you press it softly, it will gradually glide into the new desired level. This allows for a smooth series of uninterrupted controller messages, which will work with all kinds of connections.

The connections available include a USB port, a PSU socket, and a MIDI I/O on the 3.5mm jack connectors.

One of the most ingenious features which you will definitely love about the Launchpad Pro is the momentary mode changing feature. You can access the modes by tapping and latching into the new mode or by holding the button down to put you into a mode of your choice temporarily until you release the button. Once you release the button, you will be sent back immediately to the previous model. This is a superb feature for those you who play instruments.

Right beside the Session mode button is the Note button. Pressing it turns your Launchpad into a MIDI instrument controller rather than a clip launcher. You can choose from the different modes for Drum Rack controls or for the other instruments. This mode is set automatically depending on the device on the armed track.

If you pick drum mode, the 16 pads on the bottom left side light up in yellow when they have sound. All of the 64 pads can be used for playing the Drum Rack, which is a huge step ahead of the previous version of the Launchpad.

The pads and buttons

The pads of this Launchpad are very stable and solid and are very responsive to different velocities. You can also tweak their sensitivity level via the Setting page.

Once you switch to another instrument other than the Drum Rack, the MIDI notes are mapped by Note to the pads starting with C1. The diatonic scale on the bottom is indicated via blue pads, and the octaves are purple. Each row features notes which are one fourth higher than those below them, which is a very intuitive approach especially if you are familiar with guitar playing because the same chord shapes and scale patterns are used.

The arrow keys are used to transpose the notes by shifting the entire grid right or left. Still, the position of the C notes remains indicated for easier orientation.

The new Launchpad Pro has a number of added features by Novation which has turned it into a full-fledged beat production workstation.

On the left side, the buttons are for functions such as duplicating, recording, quantizing and deleting clips. Once you hit the Session Record button you will start recording a new clip on the track armed. You can also choose to record a clip at a specific slot by holding the Rec Arm button and tapping the pad of your choice. To stop recording you just need to tap Record once again. After that, the looping of the new clip will start. By pressing Record once more you can overdub your new clip. If you press Duplicate, you will create a copy of the clip and it will start playing.

The clips you record can be doubled or quantized thanks to the dedicated buttons on the left side. You can scrap previous clips with the Undo button and remove them completely by holding delete and hitting the pad of the clip.

If you press the Device button on the top row of the unit, you will get a page for instrument and effect controls in Live tracks. It is also used to toggle between Device and Clip views. It gives you control of the Top eight level macro controls and features the same virtual fader system as the mixer control does.

This button takes the place of dedicated control knobs of other stand-alone pad controllers.

Overall, the Launchpad Pro provides a seamless workflow in Live and has standalone User, Drum and Note modes which means that it can be used with Pro Tools and Reason as well as with hardware synths as well.

It is pretty straightforward, so you can start using it right away after you take it out of the box and connect it. 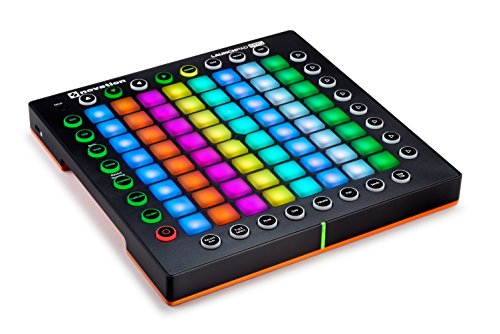 The Launchpad Pro is a versatile, rugged and very enjoyable controller which can be used as a standalone MIDI, for clip launch, as a drum pad, a motorized controller or a chromatic keyboard.

It allows for an easy and smooth instrument playing, composing or mixing experience, and can be used as a musical instrument as well. You will fall in love with the unlimited playability of the Launchpad Pro as a USB MIDI controller at standalone mode. You can use it to play drums or riffs on the grid.

The only limit truly is your imagination when it comes to the Launchpad Pro.

The greatest news is that it is very reasonably priced and much cheaper than other controllers on the market. It is very intuitive and easy to use, so you can start experimenting as soon as you plug it in.

It is a great device for professional or aspiring musicians, Live composers, DJs, youngsters interested in music, or for just about anyone who wants an inexpensive and fun tool to create their own music, play an instrument or make new sounds and mixes.